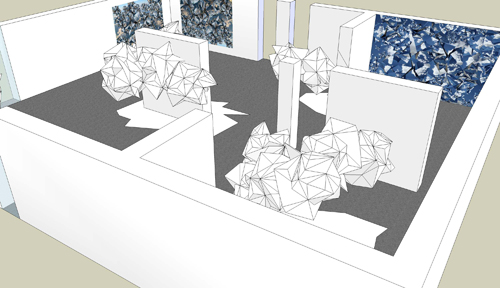 Piercing The Clouds is the title for a site-specific installation at Tin Sheds Art Gallery in June-July 2008. The possibility of moving cities from the earth’s surface into the air will be a central focus of this project which will encompass futuristic sculptural constructions, video projection and relating 3d rendered photographic works. The project will serve as a kind of urban model for a floating metropolis which might pose as a practical solution for the lack of housing and overpopulation of cities around the world.

Responding to the configuration of the exhibition space Gregor Kregar plans to make a combination of four different crystalline constructions and their associated shadows: These forms will be both free standing and attached to the wall organically protruding through the walls and moving through the space. The reflective constructions will start as simple shapes like an Icosahedron which will then grow into Icosi-dodecahedrons, Tetrahedrons and other complex geometric shapes. The combination of constructions and shadows will look like a maze of repeating crystalline mathematical forms that will twist the perspective and mirror the surrounding space of the gallery.