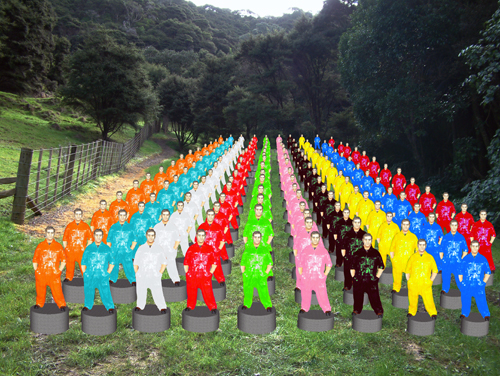 Gregor Kregar is currently working on a large site-specific outdoor sculptural installation called Vanish. This installation is commissioned by Connells Bay Sculpture Park as one of their major projects for 2008. Vanish will be the final and largest self-portrait work from a series of sculptures Kregar has worked on for the last four years. This series of works began with the sculptural installation I appear and disappear in 2003. Vanish will consist of 160 ceramic figures. There will be 10 sets of 16 self-portrait figures; each set of 10 will be glazed in a different colour. The size of the figures will vary from 140 cm for the biggest one down to about 35cm for the smallest one. The figures will be positioned to start with the largest ones at the bottom/front of the site and the smallest ones on the top/back of the site. It is Kregar’s aim that the work will activate the space by changing perspective points. An exaggerated perspective will be created when walking up the valley towards the work yet when approaching the work from the back the work will fan out from the vanishing point.

Vanish will be a self-portrait work yet at the same time it will also encompass a portrait of the anonymous person. The work questions how identity is reduced the more it is reproduced. Will the artist be shrinking or growing? This depends on which way the viewer would approach the work. Essentially Vanish will be a humanist work that will paradoxically depend on the point of view of the observer; it will suggest both the fragility of a particular art form and human life itself.